A perfect series for summertime in Los Angeles, Saturdays Off the 405 offer performances of up and coming bands and DJs playing in the courtyard of the world renown Getty. Although the museum itself doesn’t show contemporary artworks save for its photography exhibitions, this concert series is a great way to see the hottest bands in the scene.

Saturdays Off the 405 (aptly named for the major freeway below the Getty) occur once a month. Beverages and food are for sale and all the exhibits are open. Also to enjoy are the views. Known for its beautiful white buildings atop a hill in Brentwood, The Getty has panoramic views of beautiful but smoggy LA.

After DJ Chris Zielger kicked off this Saturdays Off the 405 show, Oakland’s Shannon and the Clams took to the stage. Bassist and vocalist Shannon Shaw and her clams play music inspired by doo-wop, punk and 1960s psychedelia with a dark twist. With lyrical matter touching upon heartache as well as cults, Shaw’s vocals range from a surgary coo to a throaty growl. She trades vocal duties with with guitarist Cody Blanchard whose voice is a unique, cartoonish croon.

Shannon and the Clams played old favorites such as “Sleep Talk,” “Oh Louie” and “Cult Song” plus some new tunes. The audience was treated to “Corvette,” “Telling Myself” and “How Long?” and more off their upcoming LP Gone by the Dawn.

As per usual, the band played tightly and energetically. Shaw and Blanchard have excellent musical chemistry as they carefully watched each other for cues during their set. Their stage presence was different yet engaging. Shaw interacted with the crowd, telling stories about their songs, cracking jokes and smiles. Blanchard remained stoic, more focused on his performance. These core Clam members were backed by a drummer and keyboardist–a new but good addition to the live set.

Although Shannon and the Clams played well, the band was a little too rowdy for a museum setting. Typically, they’re the kind of group you jump into the pit for. The teens up at the front were harmless Burgerama regulars but they didn’t get along with museum security. They pushed back against the rope stanchion surrounding the stage much to the annoyance of museum staff. At one point, a girl jumped up on stage to dance, but was quickly shooed off. “Try to stay classy! It’s an art gallery!” Shaw yelled jokingly as the girl fled security’s clutches.

Next Saturdays Off the 405 show is July 11th with Waters. 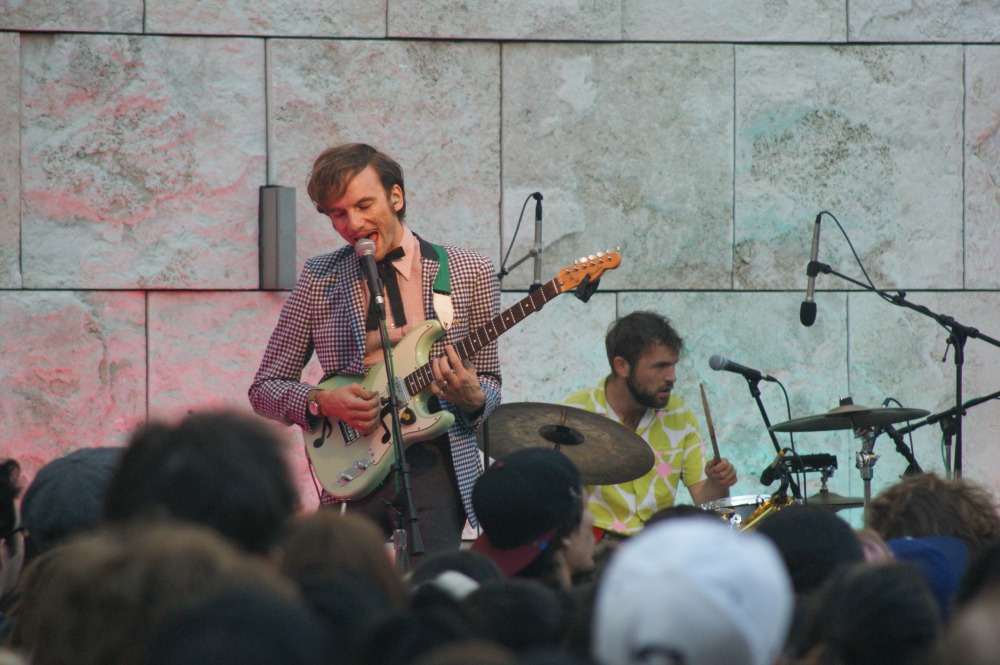 View all posts by unsignedsunday